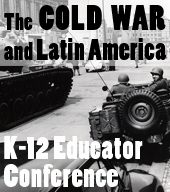 On Monday January 31st, the CLACS Teacher Residency Program hosted the conference “Teaching the Cold War and Latin America in a High School Classroom.” The conference, held during a New York City Board of Education Professional Development day, was attended by public school teachers from over 25 schools across the metropolitan area.

The day’s events were opened by Greg Grandin, a well-known Latin American historian and professor in the Department of History at NYU.  Grandin is also the author of the recent prize-winning book Fordlandia: The Rise and Fall of Henry Ford’s Forgotten Jungle City. Professor Grandin gave the keynote presentation of the conference, providing a sweeping overview of the importance of Latin America in the Cold War and setting the foundation for the days more specific presentations.

The conference was the culminating event of the CLACS K-12 Residency Program, an effort to connect recent scholarship on Latin America with materials development applicable for K-12 classrooms. The three Residents, who had been researching topics related to the Cold War for a period of 3 months, each presented the curricular materials they had produced while in the program.

Rachel McCormick , a Spanish teacher at the Bronx Leadership Academy High School, presented a workshop titled “Media Representations of the Civil War in El Salvador.”  McCormick’s presentation outlined several classroom activities, including one in which students walk around and silently write reactions next to a series of black and white photos of El Salvador during the conflict.

Following this presentation, Lev Moscow, a History teacher from the Beacon School, opened his workshop by having participants read and analyze quotations from Roosevelt, Truman and George Kennan (U.S. diplomat and historian) in order to historicize the United State Government’s perspectives and interests in Latin America during the Cold War.  Moscow also talked about a classroom exercise that he developed in which students participate in a trial and defense of Henry Kissinger, former Secretary of State and National Security Advisor during the 1970’s.

The final Resident to present her work was Karen Michels, also a History teacher at Beacon School, who presented her essay on the role of race and racial policy in the Cuban revolutionary government.  After her presentation, she split attendees into groups to examine policies adopted by the Cuban government soon after the Revolution to address racial inequalities. Participants were encouraged to evaluate the strengths and weaknesses of the policies from the perspective of the Cuban government.

The participants of the 2010 Teacher Residency Program presented to a diverse audience of teachers of various subjects who are interested in increasing Latin America and Caribbean-related content in their classrooms.  We encourage you to browse the curricular materials available for free download and use and to sign up to receive email announcements regarding K-12 initiatives via the CLACS website.

This entry was posted in K-12 Outreach and Education and tagged Chile, Cuba, El Salvador, workshop. Bookmark the permalink.