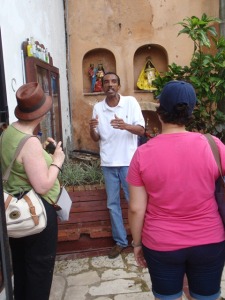 Miguel Angel, our guide, discussing syncretism during the tour of the Colonial Zone

I think one of the most controversial days we spent in Santo Domingo was on Friday, July 14th. The activities planned focused on contemporary issues about the Dominican Republic and Haiti, including a panel discussion on contemporary perspectives about Haiti. I was especially looking forward to this event because my research project focused on Dominican-Haitian relations. In some ways, I was very satisfied with the event, and in other ways I was disappointed. However, it was overall an enlightening experience.

The panel consisted of six speakers, including the former Ambassador of the Dominican Republic to Canada and Columbia, The International Project Manager of the United Nations Development Program, the President of the National Emergency Commission and Executive Director of Civil Defense, and several other distinguished individuals.

One of the my first reactions to this panel was surprise at the various organizations dedicated to investigating and improving Dominican-Haitian relations, such as the Dominico-Haitian Global Forum and Batey Relief Alliance (BRA),  of which the former coordinator and current Executive Director, respectively, were present. Their presentations on programs supporting Haitians living in the Dominican Republic opened my eyes to a world of organizations that I would be interested in contributing to in the future.

Each panelist had a unique opinion on the issue of Dominican Haitian relations, and I was intrigued by their comments, and the perspectives that drove them. For example, when speaking of the tensions between Dominicans and Haitians, the Ambassador remarked, “It’s not a problem of race, it’s a problem of nationality.” Reflecting on this later, I thought of the Dominicans I know who would agree with the statement, but also of the interviews with children I have done where they claimed the main difference between Dominicans and Haitians was skin color. It goes to show that issues between these two countries are complex, and that it is difficult to place exact labels on not only the ideologies of both parties, but the issue itself. The more I investigate opinions of Haitians in the Dominican Republic, the more the lines of division blur, and the more advanced my understanding becomes.

I was disappointed that we did have a great deal of time to ask questions of the panel; however the responses to the questions we did ask were intriguing. What they did not say ended up being just as telling as what they responded to directly. For example, when I shared with them the focus of my research project, perspectives of Haiti through the eyes of Dominican children, and asked for their advice during my investigation, no one had any specific suggestions. My first reaction to this was to assume that studies on racism during childhood haven’t been done, or at least are not well known among the community. If these highly-educated and well-connected speakers cannot recommend anything, then there must not be much out there.

I was pleasantly surprised that, after the panel discussion ended, several of the speakers gave me their contact information, and encouraged me to email them so that they could recommend some resources for my study, and expressed genuine interest in the idea of viewing race issues through the eyes of children. Also, a speaker from the previous panel focusing on issues in the Dominican Republic, recommended a book that mentions briefly the opinions of children and contains a wealth of statistics on the border area. After purchasing this book, I was extremely grateful to this presenter, because it will be a key resource during the development of my lesson plans.

For the sake of space, I won’t reflect on the other panels or activities of that day, and will instead give my overall opinion of the program. I was continuously impressed by Jen and Julianne. The level of preparation that they put into this trip was more than evident. Also, they were sure to take the time to discuss the program with us, asking for full honesty and genuinely taking our opinions into account. I felt well taken care of and supported throughout the entire week. I also cannot express my gratitude for the sheer amount of resources that I found relative to my research project and my specific interests in the country. Finally, having our teacher advisor, Barbara, on the trip was an amazing resource. She was always willing to hear my new ideas for my project, and help me develop them into activities for my unit. Overall, the trip was an amazing opportunity, and I learned more than can be explained through one blog entry. A send my sincere thanks to everyone involved.

This entry was posted in K-12 Outreach and Education and tagged Dominican Republic, Haiti. Bookmark the permalink.