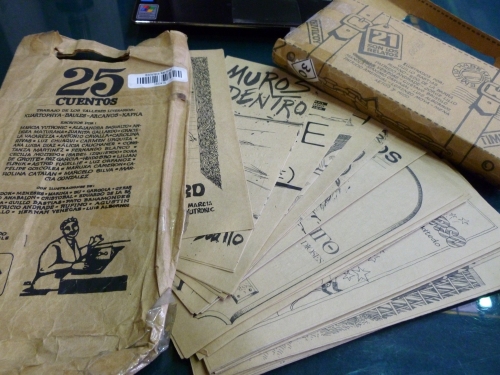 Barros's libros objetos represented one of only means of publication during the dictatorship for many authors.

Greetings from Santiago de Chile!  This afternoon, I had the opportunity to meet freelance journalist and human rights activist Maxine Lowy.  Over a pot of green tea, Maxine discussed how Chile’s Jewish communities responded to General Augusto Pinochet’s military regime (1973-1990).  Gracefully, she approached what I realize, now, is an unfair question, “Why did Chilean Jews overwhelmingly support the dictatorship, without making connections between the atrocities of the Holocaust and what was taking place in Chile?”

My question stems from trying to understand what it meant for Chilean Jewish writers to be writing about being Jewish during the dictatorship.  For example, in a climate of extreme censorship, author Sonia Guralnik published a series of short stories, El Samovar (1984), in which she discusses pogroms in the Ukraine.  Reading them, I wonder: was she implicitly critiquing the military regime in Chile?  Why did censors allow this book to be published, without permitting any questioning of its own abuses?

As most of my classmates know, I came to Chile to research the participation of several Jewish women writers in a form of literary activism that began in the late 1970s.  During the dictatorship, Chilean author Pía Barros and the authors that participated in her literary workshops began publishing libros objetos or book objects that enabled authors to write and have their writing be read even in a context of extreme repression and censorship.  So as to avoid being noticed by the wrong people, the book objects were packaged to appear non-threatening (for example, as a box of scarves or a brown paper arts and crafts sack), while containing short stories with implicit, critical political content.  For this project, I wanted to learn more about the Jewish participants in this literary movement.

While I began my research reading the libros objetos, in my first meeting with author Susana Sánchez Bravo (whose family has Sephardic roots), Sánchez Bravo presented me with the opportunity to read some of Sonia Guralnik’s unedited and unpublished writings.  Later that same week, Pía Barros offered to connect me with Guralnik’s family.  Given this opportunity, my research may shift to focus more on her writings, although I am still looking forward to interviews with authors Cynthia Rimsky and Andrea Jeftanovic.

To contextualize my literary research, I am researching the history of Chile’s Jewish communities since the 1970s, which has brought me to meetings with PhD student at the University of Wisconsin-Madison Valeria Navarro-Rosenblatt (one of the few scholars to have written about Jews in this time period), Maxine Lowy, and, in the upcoming week, with Rabbi Angel Kreiman, Professor Isaac Caro, and Activist Carlos Vasquez.  Many people have been extremely helpful in aiding me with my research, including the University of Chile’s department of Jewish Studies, Ruaj Ami, Centro Progresista Judío, foundation Educación Memoria Viva, and Pía Barros.

After several interviews and a couple of weeks of research, I find that the answer to the above questions are complex.  While Maxine explained that many Jews in Chile firmly believe that the Holocaust and the Pinochet years are not at all the same, others find definite links between the two and feel committed, as Jews, to an ethical obligation to work for social justice.  As I step cautiously into these moral questions, I am currently trying to learn more about what happened to the leftist Jewish movements during the dictatorship (especially through the youth organization Hashomer Hatzair), the many Chilean Jews that fought for human rights, and how others justified supporting (and continue to support) Pinochet.  Stay posted for more!

Posted by Raelene Wyse — MA Candidate at CLACS at NYU

This entry was posted in Field Research and tagged Chile. Bookmark the permalink.