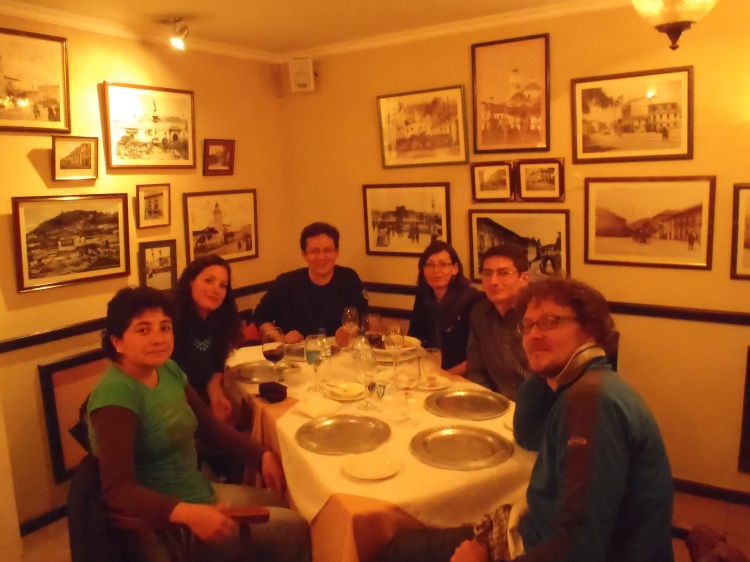 Upon my return to Quito from the conference in Cuenca I spent many days on the FLACSO campus (Latin American Social Sciences Federation).  FLACSO is an international graduate university system; there are five other campuses throughout Latin America.  There I met with many of the professors and students from the gender and sexuality studies department.  I began to interview people regarding feminism in Ecuador and its relationship to the formation of a neoliberal state.

Before leaving New York City my research interests in Ecuador had focused in on some provocative claims made by Amy Lind in her book Gendered Paradoxes.  Lind documented the progressive institutionalization of gender into state functions, NGO structures, and lending policies in the 1980’s and 1990’s, and argued that this happened at the same time that Ecuador was undergoing a period of neoliberalization.  Therefore, the mobilization of women and the institutionalization of gender considerations into social planning happened alongside structural adjustment and trade liberalization.  To the degree that women’s social organization and volunteer work helped to absorb the shock of the 1998 economic crisis, and of shrinking state services, Lind argues that these were used more in the service of the neoliberal restructuring of the state than towards women’s empowerment or improved quality of life.  I came to Ecuador following this line of analysis and found that many of the people I interviewed disagreed with the basic premise of the questions I was asking them.  Professor Mercedes Prieto asked me whether it was accurate to speak of neoliberalism as a form of governance that was ever really implemented in Ecuador.  Others argued that women’s organizations or NGO’s were not taking over responsibilities of a shrinking state but instead doing the social service work that government structures had never addressed in the first place.  President Rafael Correa governs under the slogan of Socialism for the 21st Century, which means that regardless of whether or not Ecuador was ever fully neoliberal in its governance, its present form has officially turned away from that model.  The argument that social movements, or women’s organizations, or that the instutionalization of gender considerations in governance, had somehow enabled neoliberalism to take hold in Ecuador didn’t really convince anyone.

I decided that I wasn’t doing myself any favors by continuing to follow this line of inquiry.  Instead I began to interview people regarding three social movements that are of interest to me; the environmentalist, feminist, LGBT rights movements, with a specific focus on how these movements relate to Ecuadorian state institutions.  To this effect I was still very interested in the relationship between social movements, non-governmental organizations, and executive state power.  I took a step back and allowed myself to do preliminary research, to just get a sense of what organizations are out there and what they do, and how they relate to President Correa’s administration and anything else that people might want to share with me.  I recorded many interviews and took notes on several others.  Two interviews in particular were of great interest and will undoubtedly shape my future research.

Mencha Barrera was a member of the constitutional assembly that oversaw the restructuring of NGO’s and the re-writing of the constitution in 2008 under the Correa administration.  She argued that there was a need to restructure NGO’s and clearly establish their limitations and their relationship to the state.  However, Correa’s administration took this process as an opportunity to increase executive control over NGO’s.  It seems many good laws are in place regarding land protection, funds allocation, democratic processes, or NGO authorization that include clauses stating that the law can be revoked in instances when the president deems it necessary for the good of the country.  She kindly handed me the presidential decrees that Rafael Correa sent to the constitutional assembly regarding the restructuring of NGO’s as well as the written response put together by a coalition of NGO’s, which was published in newspapers. I look forward to reviewing these primary documents for a greater understanding of the relationship between NGO’s in Ecuador and the current administration of Rafael Correa.

I sat in on professor Susan Wappenstein’s course on gender and public policy.  Rocio Romero was the guest speaker for that day.  She is the former president of the Ecuadorian Women’s Council, which served as a ministry to the state and worked toward the incorporation of gender considerations to land distribution, labor laws, healthcare, social media, and many other state institutions.  The class had a discussion about how social movements bring forward and are affected by public policy.  The following week, Rocio Romero gave me an extensive interview regarding the formation, work, and dissolution of the Ecuadorian Women’s Council in 2008.  President Rafael Correa dismantled the Ecuadorian Women’s Council by arguing that in an equal society there should not be ministries devoted only to women.  He formed a transitional committee, which has now been in place for nearly three years but does not do the same work as CONAMU.  It was unclear throughout the interview and in other conversations as to what the transitional committee does.  I did find a glossary of feminist terms that was made by the transitional committee.  It seems clear, however, that the transitional committee has not taken over the responsibilities held by the CONAMU nor has it transitioned these functions into any other state organization.

Both the dissolution of the CONAMU and the restructuring of NGO’s are instances in which Rafael Correa’s administration has positioned itself in opposition to the institutionalization of the social movements represented by the CONAMU or NGO’s.  In many cases it is clear that Correa abhors anything that stand in the way of his executive power and has gone as far a labeling those that disagree with his development plans, specifically environmental activists, as terrorists.  It is also clear that Correa is first and foremost an economist, and that all social and environmental justice work is secondary to his interest in a strong economy.  Now its time for me to return home, reflect on all my interviews, read the documents I collected, and figure out how to continue this research and what considerations I can put forward based on my preliminary work.