The promotion of the arts and, particularly, of modern and contemporary art has been in private hands. Historically, two private institutions, founded in the 1950s, have promoted Peruvian (“fine”) art: The Patronato de las Artes that leads the Museo de Arte de Lima (MALI), and the Instituto de Arte Contemporáneo (IAC). Many of their members belong to both Institutions and they comprise a large part of Lima’s elite group. The aims of these institutions were not in tension until the ends of 1990s, when controversies between members of both institutions regarding the management of contemporary art started.

In 2001, the IAC initiated the construction of its long standing Museo de Arte Contemporáneo (now MAC-Lima). This project has been interrupted several times due to the struggles between the managerial group, and the neighborhood and local government. However, with the new political party in the district hall and the new impulse of contemporary art in the city, the museum’s construction has resumed and it seems that now the Museum will be finished (see image 1).

The specific interest of the Museo de Arte de Lima in the contemporary art, started in 2005, when young members of the Patronato de las Artes took the leadership. They have redirected the Museum’s attention to contemporary art. The following excerpts of interviews with Fernando de Szyszlo, the most prestigious Peruvian abstract artist, member of the IAC and ex-member of the Patronato de la Artes, and with Natalia Majluf, director of the Museo de Arte de Lima, give insight into this debate.

Fernando de Szyszlo: It’s simple: a museum, in principle, is the repository of a country’s art. And the MALI should be a depository of Peruvian art. The board that was formed for its creation had this idea[…] The direction of the Museo de Arte believes it has an avant-garde role, and indeed that does not correspond to them: their fixation on modern art may be commendable, but it is a lateral concern, which has nothing to do with the objective of [the museum’s] formation. This task should be left, rather, to the Museo de Arte Contemporáneo.  (In Peru 21, interviewer: Carlos Chavarry, Nov. 29th 2009, the highlight is mine)

Natalia Majluf: The same Szyszlo was who had said, with regards to the Agrupación Espacio and the publication of the journal “Las Moradas,” that 1947 was the year when we Peruvians were for first time contemporaries of all men. Should we cease to be contemporaries today? I believe not. And what the museum does not want and will not do is to retreat to a provincial position and only look inward. I think that the great dynamism that Peruvian art has achieved in the last 5 or 10 years has to do with the opening-up that the Peruvian scene has shown since Lima biennials and also with the work of the museum itself […]… All of them have helped to develop a new perspective about art in Peru. (In El Comercio, Dec. 6th 2009, the highlight is mine) 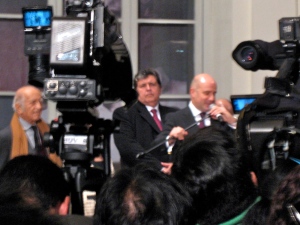 However, this dispute seems to have come to an end. A big retrospective of Fernando de Szyszlo’s work was inaugurated in the MALI on the 5thof July 2011 (see image 2). MALI never held before an exhibition of Szyszlo, and as the president of the Patronato de las Artes’ committee board, Juan Carlos Verme, pointed out, the exhibition in the MALI fills a gap in the museum. It was the president, Alan Garcia, who inaugurated this massive and important event.

Posted by Giuliana Borea – PhD Candidate in Anthropology at NYU

This entry was posted in Field Research and tagged art, museums, Peru. Bookmark the permalink.