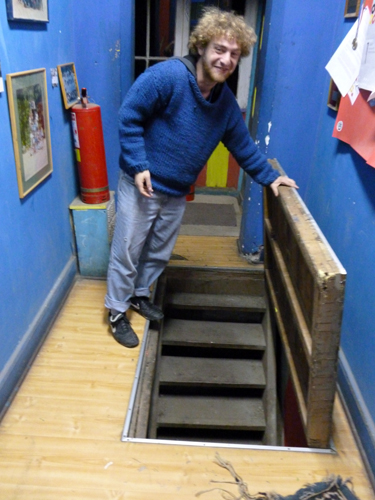 Tom, one of the leaders at Hashomer Hatzair, holding up the secret door (normally covered by a large rug)

This past week, I found myself lifting up a hidden door in the floor of Santiago, Chile’s Zionist youth organization Hashomer Hatzair.  Peering through the doorway at a dark basement below, I listened as Carlos Vasquez, a former member of the group, described how the room once hid books and people that the military regime (1973-1990) considered dangerous.

A central component of my research has been trying to explore how the military regime affected Chile’s Jewish communities.  My goal is to learn more about Chilean Jewish authors Andrea Jeftanovic, Cynthia Rimsky, Sonia Guralnik, and Susana Sánchez Bravo, and how they are representative (or not) of Chile’s Jewish communities from the 1970s to the present, especially in terms of how they discuss and construct Jewish identity in their writing. 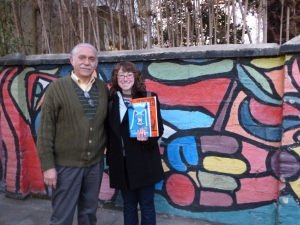 Carlos and I in front of one of the murals at Hashomer Hatzair that was repainted after being destroyed during the military regime.

I had been looking forward to speaking with Carlos, a Jewish man that participated with the leftist movements in Santiago in the early 1970s.  Many of my other interviewees have commented on how unpopular Salvador Allende’s presidency was among the Jewish community (around 8,000 Jews left Chile when he was elected).  My hope was that Carlos would offer a different perspective.

Carlos’s eyes lit up as he described the excitement of participating with Hashomer Hatzair in the early 1970s.  He and many of his friends mobilized in support of Salvador Allende not just as Chileans, but as Jews (which had not happened before).  When Augusto Pinochet seized power in 1973, Carlos stopped going to Hashomer Hatzair and cut of all of his ties to leftist activism.  ‘I wish I could tell you I did so much more, but I didn’t,’ he confesses.  In our interview, he explains the frustrations of staying silent to save himself and his family, while watching as many of his friends were disappeared.

Listening to his story and others, I am reminded of how the military insidiously and efficiently hushed its opposition.

After speaking with Carlos, I am not surprised that Cynthia Rimsky shakes her head when I ask about a critical Jewish voice or when Andrea Jeftanovic begins to criticize the Jewish community in Chile.  The military not only squashed any opposition, but also highlighted its supporters, which included a large, vocal part of the Jewish community.  The leading Jewish newspapers in Chile, as well as many Jewish public leaders loudly supported Pinochet, while actively ignoring (or justifying) the regime’s violations of human rights.

Learning more about Chile’s Jewish communities, I am more appreciative of these authors’ descriptions of Jewish themes and characters affected by the military regime in their writing.  Are they answering the challenge of constructing a Jewish identity separate from and critical of the Jewish leadership in Chile?  I hope to examine more answers to this question, as I look forward to interviews with Rabbi Angel Kreiman, one of the only Jewish leaders that worked to help political prisoners during the military regime, Jorge Zeballos, a leader at Hashomer Hatzair (that has been described by some of my contacts as a walking Wikipedia of Jewish communities in Chile), and Sonia Guralnik’s son, Hernan Chaimovich, among others.  More coming soon!

Posted by Rae Wyse – MA Candidate at CLACS at NYU

This entry was posted in Field Research and tagged Chile. Bookmark the permalink.

One response to “Jewish Chilean Responses to Pinochet’s Dictatorship”