Federico García is among the most prolific filmmakers of Peruvian cinematic history.  Several of Garcia’s films were shown as part of the Mundos Andinos series – a collaboration between CLACS at NYU and ILAS at Columbia University.  The filmmaker also attended the film screenings and participated in multiple panels to discuss the films within Peru’s broader historical context. These films are rarely shown in the United States, and it was even more exceptional to screen them with Federico García and his producer Pilar Roca’s participation. 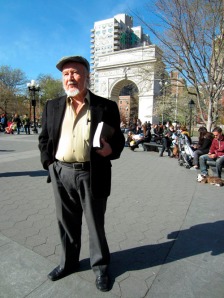 On April 2, Mundos Andinos featured Kuntur Wachana (1977), which remains the only film to date made about Peruvian Agrarian Reform measures carried out by Gen. Juan Velasco Alvarado’s military regime.  The film tells the story of 1950s and 1960s campesino struggles.  Members of the   Huarán cooperative, a group who took over the hacienda at Huarán outside of Cusco city, financed the film and also acted as main characters.  Kuntur Wachana features primarily the Quechua language.  The Federico García was joined by Miryam Yataco, an educator in NYU’s Steinhardt School of Culture, Education, and Human Development, for a presentation after the event.

García’s feature film Túpac Amaru (1984) was shown on April 3.  This film presents the life of the legendary Inca revolutionary José Gabriel Túpac Amaru (1704-1781) and his fight against Spanish colonization.  Made at a time of revolutionary ferment in Peru, Túpac Amaru provocatively engages with questions of conquest and liberation in Andean history. CLACS Director and historian Sinclair Thomson, whose research has focused on visual representations of Túpac Amaru, participated in the film discussion with García. On Friday, March 30, García and Roca presented Los danzantes de la Montaña Sagrada, a recent documentary about Peruvian scissor-dancing, and Pachakuteq: Una aproximación a la cosmovisión andina, a recently published book written by García.

Von Diaz is a writer and radio producer based in New York City. She is a self-taught cook who explores Puerto Rican food, culture, and identity through memoir and multimedia. Her work has been featured on NPR, American Public Media, StoryCorps, WNYC, PRI’s The World, BuzzFeed, Colorlines, and Feet in 2 Worlds. View more posts