One of the first impressions that I had of Mexico City upon coming here for the first time, seven years ago was that the metropolis was saturated with food.  In addition to grocery stores, restaurants, and cafes of all types, the streets themselves teem with places to eat. White metal stands line the sidewalks near major and minor thoroughfares, selling sandwiches, fresh fruits and juices, tacos, and antojitos (corn-based snacks such as quesadillas and tostadas).  Other vendors come early in the morning and set up tarps, coal-fired griddles, and a few plastic stools on street corners in residential and commercial areas, where they sell tacos, antojitos, and tamales.  Still other vendors are fully mobile, pushing carts, riding bicycles, or carrying baskets to ply their wares, often yelling out the types of products they have on offer (churros, roasted sweet potatoes, sandwiches, tamales, corn on the cob, sweet breads, tacos de canasta) as they weave their way through the city.  Street food, or comida callejera, certainly exists in other countries, but in Mexico it is particularly vibrant, omnipresent, and embraced as a part of the national identity.  People from most walks of life frequent street food stands, at least periodically, and many people depend on their products for affordable, nutritious daily meals.  Yet the majority of street food vendors, despite their iconic status and importance in the urban food landscape, exist precariously in the informal sector, where they are regularly declared to be problems by politicians and city residents alike.  Vendedores ambulantes (or mobile vendors) are commonly criticized in terms of public health, waste disposal, tax evasion, corruption, use of public space, or quality of life.  As an anthropologist, I am interested in the implications of these contradictory rhetorics and practices around street food for Mexicans, as consumers, vendors, and political actors.

This summer, with the generous support of the Tinker foundation, I am conducting preliminary field research in Mexico City in order to more fully develop my dissertation proposal and understanding of the field.  Some general questions that I ask are: How do different actors define in/formality in relation to street foods?  What role does food play in defining urban spaces and politics?  How do ideas around health and well-being inform people’s attitudes towards street foods and vendors?  I am working under the guidance of Professor Miriam Bertran of the Autonomous University of Mexico (Xochimilco campus), and am meeting with anthropologists from other universities as well.

I have chosen to focus much of my fieldwork on the Colonia Roma this summer, a historic neighborhood in the central part of the city, which seems to be undergoing a process of gentrification.  My first several days of research here were spent carefully walking up and down every block in the eastern part of the Roma Norte, and mapping 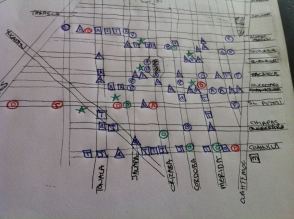 what kinds of foods were being sold where and at what times (see picture).  I did this walk several times (morning, afternoon, and evening) in order to see if there were many changes throughout the day in vendor activity and location.  After this blister-inducing reconnaissance mission, I started to frequent a few street food stalls that I had chosen to represent the types of foods and types of establishments that were most commonly found in the area.  These are a fixed structure metal juice stand, two tamale vendors, a mobile fruit cart, an antojito stand, and a weekend barbacoa (sheep taco) stall.  In addition to consuming astounding quantities of corn-based calories, my time at each of these places is spent observing the interactions between vendors, passers by, and customers, and informally interviewing and conversing with them.

When I ask people—vendors, customers, friends, professors—to talk to me about street food and their opinions and experiences of it, they often mention the perils and pleasures of eating in the street.  Each person has specific places that they consider the cleanest and most delicious, and often these places are associated with childhood memories and daily routines.  People think fondly of la señora de las quesadillas ricas that they may have gone to with their family as children.  Or they may have mucha confianza in the juice vendor who is down the street from their office job.  It is common to hear people talk about antojos, or cravings that they might have, and which can easily be satiated in the street.  Yet the theme of digestive peril also plays a major role in informing where people believe is good to eat.  I have been warned many times not to eat at the stalls outside of the subway, or not to eat in specific neighborhoods at all, or not to eat tacos de canasta or other particularly cheap street foods because they may be heavy or dirty and cause diarrhea or other stomach problems.  The idea of street food as inherently somewhat risky is pervasive, and hygiene or lack thereof is used as a way to differentiate edible from repulsive foods.  This can be seen, on the one hand, as a massive success on the part of public health campaigns aimed at preventing food-borne illnesses and improving sanitation and hygiene in public spaces.  On the other hand, I wonder what people’s assessments of dirt and cleanliness are based on, since at face value there appears to be little visible basis for differentiation.  Certainly, people are not going about doing swabs of bacteriological content in salsas and taco fillings, and yet when they talk about how subway station food, for example, will make one sick to the stomach, they are implicitly talking about the bacteriological content and cleanliness of the food.  The thing is, as Mary Douglas and numerous anthropologists after her have argued, the concepts of dirt and of risk are highly culturally determined, and serve to create distinctions and boundaries in a given society, even when they are couched in the ostensibly objective language of science or medicine.  More on this and other tidbits soon….

2 thoughts on “Street Food in Mexico City: The Dirty, The Clean, The Tasty”