Searching in Buenos Aires: a Story from the Field on Hunting for Contacts, Answers, and Conclusions

Ready for a bus ride across town.

Last year’s Tinker grant recipients stressed the importance of persistence while in the field. For the most part, I’ve been getting in touch with exactly the contacts I’d been hoping to find, but some people have been more difficult to track down. What really brought me to my research question, whether or not Asignacion Universal por Hijo empowers women, was an annual report put out by a private organization indicating that deaths from domestic violence are on the rise in Argentina. I wondered if this had any connection to the implementation of AUH, so I come to Buenos Aires with high hopes of meeting with the director of the organization. She was quite difficult to hunt down, but when I finally did get to meet with her, she shared some great information with me. Persistence in the field really does pay off!

When I first arrived in Buenos Aires, I got in touch with a woman named Majo who has a great network of people working on social programs and women’s rights in the local area. Majo has been an incredible help in getting me directly connected with all the right people. I had tried calling and emailing the research organization several times with no response. Majo had not been able to get in touch with anyone at the center either, so she suggested that I accompany her to her weekly meeting the last two Wednesdays. Every week, the Buenos Aires Legislature hosts a meeting of approximately 35 women’s rights-based organizations where these groups can collaborate, plan events and awareness campaigns, and all stay in touch about developments in women’s rights in Argentina. Majo said that the founder of the research organization attended this weekly meeting, so I was excited to finally have an in. 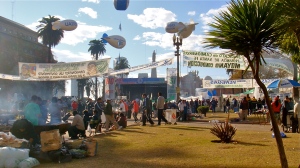 Truckers unions protesting in the Plaza de Mayo. This resulted in the Buenos Aires Legislature cancelling meetings for the day.

The first week, the meeting at the city Legislature was cancelled at the last minute because of a truckers union strike. While the protests are ongoing, they don’t seem to have made significant progress. There is talk of public transportation workers joining in on this strike, which could theoretically make the final days of fieldwork easier said than done. The second week, I arrived at the downtown Legislature building at 10:45 for a meeting that was scheduled for 11:00 but didn’t start till 11:30 and then lasted for two hours. I stayed for the entire meeting, hoping this impossible-to-track-down woman might show up, but she was nowhere to be found.

Finally, I came across the organization’s address and ventured across town to find the office. When I found the number posted on the side of an otherwise unmarked, wooden door on a busy street filled with shops, cafes, and thousands of Argentines hustling in either direction, I wasn’t sure what to think. I rang the bell, I knocked, I tried shaking the door to see if it would open. I looked into the stores on either side of the door, looking for some obvious sign with flashing lights, and finally the man at the newspaper stand right out front, who I’m sure was amused by the scene I was making trying to get into this door that I’m sure goes unnoticed more often than not, came over and told me the organization didn’t open until 3pm each day. This explained why they hadn’t answered my calls in the morning and early afternoon hours.

He pointed me away from the overpriced cafes on the main street and suggested a shop a block and a half down a side-street. An hour later, I walked back to the main road right, and the newspaper stand was GONE — thank you mystery man!! When I rang the doorbell this time, the woman I’d been trying to hunt down for 2 1/2 weeks opened the door and I had hardly introduced myself or explained my project before she pulled me in off the busy street, led me up the stairs to the organization’s small office, and began rattling off the answers to all the questions I had ever wanted to ask her. Her information provided a really great contrast to the rest of the interviews I have been conducting here. She pointed out that while domestic violence claims and deaths from domestic violence are increasing in Argentina, the reporting systems are also increasing. This is likely related to another source I found, the Buenos Aires commission that put out an awareness campaign for women’s rights in 2009. With greater awareness, domestic violence-related claims may be more likely to be reported. But she believed that even with increased awareness and increased reporting, violence is a problem that is still increasing. We visited about how this may or may not be linked to current social programs and discussed what policy changes the government could make to enhance the wellbeing of women who are at-risk or are victims of domestic violence.

One of several murals on streets of Buenos Aires, intended to create awareness on women’s rights and resources for victims of domestic violence.

She was quite helpful, and after our chat, she kept thanking me for being interested in her organization’s work and wanted me to know that she’d be happy to help out with anything I needed for the rest of my project. Lesson learned: even while some people are hard to track down, it doesn’t mean they don’t have the answers to each of your burning questions, and it certainly doesn’t mean they don’t want to help. Apparently persistence really does pays off.

Posted by Kristi Philips – MA Candidate at CLACS at NYU

One response to “Searching in Buenos Aires: a Story from the Field on Hunting for Contacts, Answers, and Conclusions”