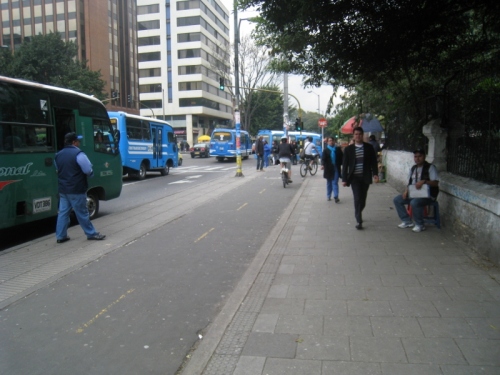 Bogotá is an enviously bike-friendly city, although the bikers themselves are less than friendly to tourists ambling haplessly across one of the city’s 300 km* of ciclorutas. Despite neglect by recent mayors, this network of bike paths and the city’s weekly ciclovía have managed to create quite a bike culture. It’s an impressive urban development in a city where the average driver can out-careen any New York taxi.

Since my thesis research currently looks a bit like squirrels nesting in a frat house, I’ve decided to write about this bike culture that has caught the eyes of sustainability-minded transportation planners around the globe.

The ciclorutas were the brainchild of former mayor Enrique Peñalosa and were constructed during his 1998-2001 term. They follow a grid system that takes into account Bogotá’s erratic topography, and are also integrated with the TransMilenio, Bogotá’s bus rapid transit system. Bogotá’s ciclovía, in which major roads are closed down on Sundays and holidays for use by cyclists, joggers, and the aforementioned ambling tourists, goes back to 1974. Since its inception, the ciclovía has seen repeated challenges to its hours of operation and the number of roads closed, though the continued efforts of Peñalosa, other mayors and city officials, and ciclovía users have maintained the tradition.

City officials estimate that Bogotanos make between 400,000 and 600,000 daily trips on their bicis, which provide a more affordable and occasionally quicker alternative to private automobiles and the TransMilenio (known locally as the “Trans Muy Lleno,” the “Trans Muy Lento,” and “I think your abuelitajust kidney-punched me”). While I haven’t found statistics on the wallet-and-waistline benefits of the ciclorutas, a 2011 study from the New York Academy of Medicine claims that the ciclovía saves about US$71.10 per person per year in health costs. This evens out to US$3.20 to 4.30 saved for every dollar spent on the program, which is funded by private sponsors and a tax added to citizens’ phone bills. Since the ciclovía uses preexisting infrastructure, it’s a lot cheaper than creating new bike lanes.

Moreover, the ciclovía is just pleasant. Between 500,000 and 1,500,000 people participate in each event (the variation is probably due to Bogotá’s weather, which is even less predictable than its drivers). The users are incredibly diverse: frazzled mothers chasing ambitious tricyclists; teenagers on skateboards; and athletes impressively undaunted by hills and thin mountain air. Municipal employees direct traffic and stalled drivers are entertained by street performers eager for the captive audience. It’s like someone institutionalized the Sunday stroll.

Bogotá’s bike culture has its share of imperfections. A campaign was recently launched to encourage citizens to bike at least once per week, but is impeded by stubborn prejudices; biking isn’t always viewed as appropriate for women and as in many places throughout the “developing” world lacks the social oomph of driving a car. There are also logistical issues, as bike lanes painted on sidewalks cause conflicts with pedestrians and those constructed in roads force bikers to battle smoke-spewing vehicles with drivers disinclined to respect their space.

These challenges have been met with unique responses: publicized bike rides by elected officials and official events such as “la semana de la bicicleta” and a car-free day, which serve to kick start dialogues about sustainable transportation and encourage/force people to find alternative methods of travel.

Cities in the U.S. obviously face different challenges when it comes to encouraging bike culture. Bikes are seen less as indicators of poverty and more as recreational tools, political statements, or harbingers of “creeping European-style socialism.” It’s hard to imagine NYC or Chicago holding a mandatory “car free” day, but Peñalosa’s efforts reduced traffic by around 40% during peak hours. Perhaps there’s something to be said for this sort of encouragement.

Posted by Kevin McLoughlin – MA Candidate at CLACS at NYU

One thought on “Bogotá and Bicycles: Steps Towards Sustainability”