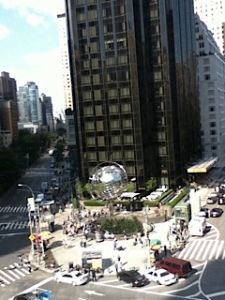 Being a grad student means that I don’t have a lot of time to enjoy this incredible city, but when my sister, Cat, came down from Boston a few weeks ago, I couldn’t help but take advantage of having a partner in crime to play tourist with me.

After meeting at Penn Station, we checked out the “Discovering Columbus” exhibit at Columbus Circle, which allowed us to go up to the top of the Columbus statue and stand in a living room that has been built around it. It offered a great view of Columbus Circle and a different perspective of Columbus himself, as seen close up. After the exhibit, I showed Cat around NYU and we got a snack at Peanut Butter and Co. on Sullivan St. We got the Cinnamon Raisin Swirl sandwich, which had cinnamon raisin peanut butter, vanilla cream cheese, and apple slices. It was served with baby carrots and potato chips, which I thought was a nice touch. After leaving campus full and satisfied, we headed down to DUMBO (Brooklyn) to The Powerhouse Arena, which is a bookstore and event space where Jeffrey Eugenides launched the paperback release of The Marriage Plot and read a bit from the novel. We were even able to get our books signed! 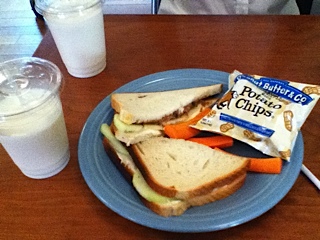 Sandwich at Peanut Butter and Co.

Cat’s second day was much more activity filled. Living in Boston, she’s been to New York City quite a few times, but there were still a lot of things she wanted to check off her list. We started out by getting lunch at Katz’s Deli, known to us by the famous scene that takes place there in the movie When Harry Met Sally. The experience of ordering at Katz’s was fun because we could watch our sandwiches being made and we were given samples of pastrami while we waited. We each got a “Ruben”, which we quickly learned was a mistake- one sandwich would have been enough for the both of us! 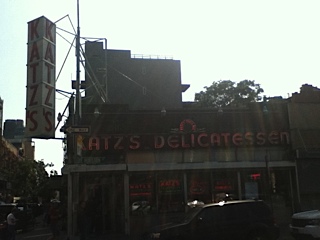 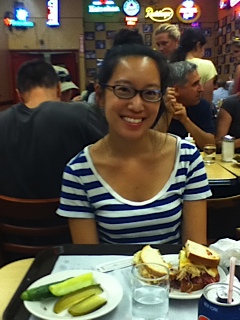 After Katz’s, we headed to the Brooklyn Bridge and walked over it to Brooklyn. While a bit anticlimactic, it was still an exciting experience and a sort of rite of passage for a new New Yorker. There were even vendors along the way selling fruit and beverages and the views weren’t bad either, of course. Once setting in foot in Brooklyn, we hopped on the subway and headed back to Manhattan for a well-deserved treat: frozen hot chocolate at Serendipity! Unfortunately, after we made our way to the Upper East Side, we still had to wait for a bit over an hour to get a table. It was definitely worth it, though. We each got a bowl of chili and a huge frozen hot chocolate-perhaps an odd combination, but so, so delicious. I really like the decor of the cafe too. It was whimsical and full of stained glass lamps hanging from the ceiling. 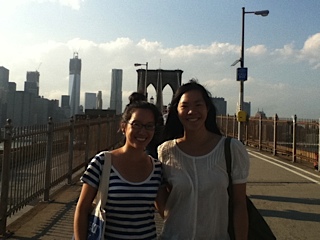 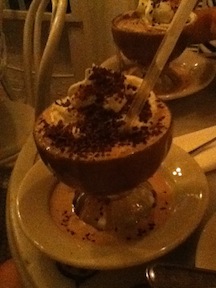 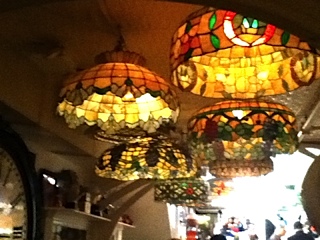 My sister’s visit was a fun-filled and busy weekend and I really loved showing her around my new home. I’m still getting familiar with the city and learning how to get around, so hopefully the next time she comes I will be able to show her even more. New York City is endless when it comes to things to do and see, so I’m looking forward to welcoming more visitors and showing them around, too!

Elizabeth Con is an MA Candidate at CLACS at NYU

This entry was posted in Uncategorized. Bookmark the permalink.

One response to “Sister, Sister”