“What’s Left of Cuba” Colloquium: The Cuban  Argument With Itself 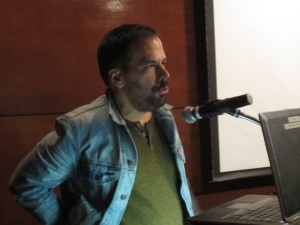 On Monday, February 25th, CLACS hosted its fourth lecture as part of the Spring 2013 colloquium series, “What’s Left of Cuba? Culture, Politics, and Civil Society.” The lecture, entitled “The Cuban  Argument With Itself,” was given by Jorge Ignacio Cortiñas, a Cuban-American playwright and director best known for his play, Blind Mouth Singing, which was translated and produced in Havana, Cuba in 2010. Cortiñas is the first Cuban-American playwright to be produced in Cuba.

Cortiñas began his talk with a series of images and dates of political violence that characterized Miami in the 1980s. The images, he argues, depicted a “series of lines you could not cross” as a Cuban living in Miami. He argued that it was dangerous to go to Cuba, to speak of Cuba favorably, to follow Cuban culture or art and/or talk with anyone living in Cuba because of the anti-Castro, anti-Cuba vehemence throughout the city. He highlighted the rigid intolerance, discrimination, and tension that surrounded his childhood city, making it a “toxic place” grow up. It is to him what Cuba had been for his parents decades earlier.

Cortiñas then shared some of the challenges he faced during the production of his play Blind Mouth Singing in Havana. He talked about the lack of materials, shortage of food, difficulty of transportation for the actors, the constant presence of emigration in daily life, and the economic incentives that forced actors to drop the play midway through rehearsals. His examples pointed towards a larger culture of scarcity facing artists in Cuba. He discussed the trials of being an outsider and dealing with the preferential dual economy. However, he also shared his joy and surprise at how Cuban actors responded to the play. In translating his work, Cortiñas was interested in how one could maintain a “strangeness of language” to challenge the comfort of belonging.

He concluded with a short summary and clip of a more recent work titled Bird in the Hand. He talked about the themes that feed into his work – the longing for homeland, a sense of unattached dissatisfaction, a persistent attempt at return. He said he finds himself missing Miami, but unable to go back. His plays, he argues, helps him to navigate the space that Cubans traverse simply by being Cubans. He discussed the space between Miami, Havana and New York, a space challenging for people to cross, but an invisible barrier which is constantly breached by radio waves, nostalgia and telephone calls. Although his lecture had a somewhat somber tone, it simultaneously served as a mini performance for Cuban and non-Cubans alike. It incited a sense of isolation and unresolved loneliness, but also an intangible common shared in the notion of being not at home.

Kailie Middleton is an MA Candidate at CLACS at NYU, and Natalia Duong is an MA candidate in Performance Studies at NYU. Both are currently enrolled in the CLACS Interdisciplinary Seminar: “What’s Left of Cuba? Culture, Politics, and Civil Society.”

This entry was posted in Events and Happenings and tagged Cuba, Middleton. Bookmark the permalink.