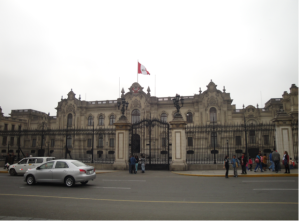 I have been working closely with Augusto Boal’s “Theatre of the Oppressed” to help contextualize the importance of popular theater and its techniques with my research. In the foreword to his book, Boal writes that popular theater functions as a weapon. That is, popular theater is a tool, a “weapon of liberation” against sources of domination (ix). Boal writes that popular theater fundamentally changes some of the theatrical forms established by traditional theater. In applying Boal’s concepts on popular theater to my research with Yuyachkani’s Antígona, I see how this particular one-woman performance also serves as a tool. In this case, Antígona is a tool not only to remember, but also to make a political statement. In my first blog, I talked about the existence of various forms of memorialization (truth commissions, museums, and performance). Along with this, there also exist different memories, sometimes conflicting. There is not one, sole memory of the internal armed conflict. It may be a result of the same event, but the way one remembers and what they remember is based on certain experiences. Antígona specifically triggers the memory of women who had members of their family disappeared and the struggle in demanding proper burials for their unburied dead. In fact, Teresa Ralli revealed that her portrayal of Antígona was based directly on a group of eight or nine women, whom she later invited individually to share their experiences and stories with her in Casa Yuyachkani. In the performance, Antígona serves as the embodiment of the fragility and power in these women’s testimonies.

Antígona is also a political statement. In “Theatre of the Oppressed”, Boal argues that “all theater is necessarily political”, and Antígona gives us that (ix). By dealing with the impact of Peru’s internal armed conflict, Antígona forces us to remember what happened during the 80’s and 90’s in Peru and exposes us to topics that are never easy to revisit, such as the issue of the disappeared, the unburied dead, corrupt and inefficient politicians, and the inaction of some Peruvian citizens during those years.