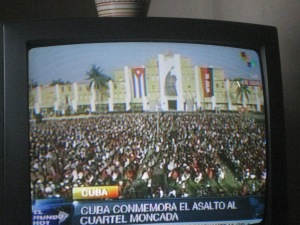 Cubans enjoyed a long weekend this past week in celebration of the national holiday, el Día de Rebeldía Nacional. The national holiday commemorates the anniversary of the attack on the Moncada Barracks led by Fidel Castro on July 26, 1953. The strategic plan to raid the barracks was foiled, and the surviving young rebel combatants were captured and punished by the Batista government. Fidel Castro was sent to prison, later to be tried in court, where he gave his famous speech History Will Absolve Me. The attempt to take the garrisons was a militaristic fracaso, but it brought Fidel Castro’s Movement— some of who would later become the guerrillas to fight in the Sierra Maestra— to the world’s attention. The national holiday serves as a day of remembrance for all the men who were willing to sacrifice their lives for “a better Cuba.” This year, I was fortunate enough to be in Cuba on the 60th anniversary of el Día de Rebeldía Nacional to watch the ceremony live on television.

At 7:05 a.m., all five Cuban television channels were tuned in to the commemoration ceremony staged at the site of the attack in Santiago de Cuba. I woke up bright and early to watch the celebration on t.v., though I found that I was the only one in the house who seemed to be interested in the day’s events. As the children’s choir sang on stage, the cameras panned the crowd. I was shocked to see that presidents from throughout the region had come to celebrate the Cuban national holiday!

President Maduro from Venezuela, President Mujica from Uruguay, President Morales from Bolivia, and President Noriega from Nicaragua gave speeches at the event. Additionally, representatives of nearby Antigua and Barbuda, Dominica, San Vicente, Santa Lucia and Ecuador also spoke. They stressed the symbolic meaning that the July 26th Attack on Moncada has had on the region’s sociopolitical trajectory. President Noriega, for example, said, “Moncada es la victoria de las ideas,” congratulating the Cuban people for their tenacity and ingenuity.  The Prime Minister of Antigua and Barbuda called the July 26th Movement a “movement for dignity and respect; of moral integrity and great courage,” And Ricardo Patiño said it “fue una chispa en América Latina.”

Whether one is for or against—or politically neutral to— the Castro government, it is clear that the Cuban Revolution and the Cuban people have played an important role in the regional politics of the twentieth and twenty-first centuries. It is undeniable that the island’s recent history has made it a case study worth learning, and its relationship with the ALBA countries makes it worth keeping an eye on.

This entry was posted in Field Research and tagged Cuba, Middleton. Bookmark the permalink.