Is It Possible to Decolonize Mestizaje? Part II

At the Colloquium “Is It Possible to Decolonize Mestizaje?” organized in April by Professor Silvia Rivera Cusicanqui, Ghosthorse talked about decolonizing language and decolonizing thought. Language, in fact, is at the heart of colonization.
Tiokasin Ghosthorse drew many parallels between Indigenous and Western thought and ways of life, and between the Lakota language and the English language. He explained that Lakota means “making friends, allies.” But paradoxically, Americans call Lakota people Sioux, that means “enemies.”
He explained that English language is composed  20% by verbs, hence it imposes life to things: “You water plants, plate food, pen the pen, floor the floor!” It is a language of humiliation, time, and domination.
Lakota language is composed  80% by verbs; it is a language of life. Lakota language has no word for skin color. People of non-indigenous descent are called Wašíču, that means “one who takes too much.” And Lakota people don’t have the concept to be free, because free is what you naturally are.

Tiokasin Ghosthorse then took a white board and drew a circle: “This is how Lakota people see the earth and life,” he said.
After that the drew a rectangle: “This is how Western thought works, and what Indigenous students were taught in boarding schools.” Compulsory boarding schools were established between the 19th and 20th centuries in the United States to educate Native American children according to Euro-American standards. Children were forbidden to speak their Native language and forced to abandon their Native American cultures and identities in order to assimilate into the American way of life.
According to the “squared” representation of life, you have to follow step-by-step a certain path to reach the final goal. But these goals imply an ending to the journey after they have been reached.
He explained how Indigenous people have always been put at the bottom of society, at the bottom of the rectangle. But he reversed the meaning of this representation by turning something negative into something positive when he said that Indigenous people, from the bottom, are sustaining the whole world. If Indigenous people decided to rock ‘n roll, everything would collapse.

He then drew the rectangle inside the circle and commented: “If you think within the rectangle, or within the box, as they say today, see how much you are losing.”
Then he concluded saying, “I don’t want to run out of time, because I don’t have a conception of what it is! But I will leave you with a Lakota saying: ‘If you stop counting the stars, you will stop to exist.’ “

Another presenter at the conference was Mario Murillo Aliaga (Universidad Mayor de San Andrés, La Paz) who spoke about the practice of identity and the identity of practice.
He showed a video about the ethnographic collective research project The Ch’ixi Nation: a View from the Isla del Sol, which documented the experiences  of a group of researchers that went to the Isla del Sol and tried to interact with the local community to trace the notions of nationhood as embodied social practices. 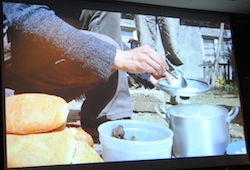 They engaged in a process of problematization of their own position as subjects and researchers. The context of this reflection is both political and personal. He said: “On the one hand, we are facing a ‘Plurinational State’ that is based on an emblematic and essentialist view of indigeneity. On the other hand, we want to become persons, jaqi, in the Aymara sense of the word, by returning to the land and the practice of communal rituals.” This desire is problematic because people in the Aymara communities of Isla del Sol have associated the group with the q’ara, or the gringo, who brings about images of predation and reification of culture. Their personal relation with the sacred landscape has been a way to face this challenge from the standpoint of their own potential and limitations as mestizo/a researchers. They see this as a first step in a dialogic process of becoming persons.
Mario explained that for him research is a human work that has social consequences. To summarize his experience, he told the anecdote: when he was studying in a public university in La Paz, he was seen as white. He then went to a private university and he was seen as black. In the Isla do Sol he is a gringo. In New York he can be taken as indigenous.

Amalia Córdova (NYU) explained how Indigenous-produced video is positioning itself as a distinct field of cultural production—a signifying practice distinct from national cinemas, community video, and “alternative” media practices. She discussed the uses and risks inherent in the terms indigenous media and indigenous video (“video indígena”) for diverse agencies, actors, and stakeholders in the field. Córdova reflected on the hybrid and collective media production processes of indigenous video and examined the traditional spaces of national and regional (‘Latin American’) cinema, as related to indigenous cinemas, drawing on notions of “imperfect” and Fourth Cinema. She talked about the right of communication also through visual images of Indigenous communities, and she explained how the “indigenous communication” community is weaving a wider network of solidarity and activism, adopting indigenous methodologies and circulating socially-committed media. Through this media, the speaker seeks the simultaneous development of a global indigenous movement and its push towards self-representation and de-colonization through media practices.

Amalia Córdova then drew a parallel between indigenous film festivals and the Colloquium organized by Silvia Rivera Cusicanqui. She praised the event and its Indigenous characteristics, such as the fact that speakers were all sitting together in a semicircle; that everyone had the right to speak and express themselves without being interrupted and with the attention of all the participants. She described a very respectful and democratic process that is very distant from the political talk-shows which we are used to, in which the invited speakers talk one over the other and where  the strongest voice prevails on the others.

Alejandro Jaramillo, a performance and audiovisual artist based in Bogotá, Colombia, did a perfomative statement by Skype. As he was speaking, he was painting his face darker. He told the audience that he had only recently realized that part of his family had the skin darker that his. He had never noticed this difference and he only found out looking at his family album with another person who had pointed it out. He was shocked by this revelation because he had always considered his family to be white. Everybody wants to be white!

As he was making up in a mixture of Indigenous traits and transvestism, he declared: “Contemporary life and world are ruled by the logic of capitalism. Every person has to produce something, and put that something in the market.
Everyone must have his/her own brand: either you make up your brand or somebody else will do it for you. Whatever you produce, your time, your appearance, are commodities for exchange. Nowadays, this caricature reflects itself in every dimension of citizenship: human branding is used to classify human beings in the academy, in the media, in society and culture. A few examples: de-colonial thinking is certified by people seriously involved in centers and dynamics of dominant colonial power. Border identities are recognized central powers and institutions. Queers are incorporated as normal and ordinary. Artistic knowledge and creation are integrated to the rules of circulation and validation of scientific knowledge. In those circumstances: How/what to become? At what cost can we live in the margins?”

Read>> Is it Possible to Decolonize Mestizaje? Part I

This entry was posted in Events and Happenings. Bookmark the permalink.

One response to “Is It Possible to Decolonize Mestizaje? Part II”