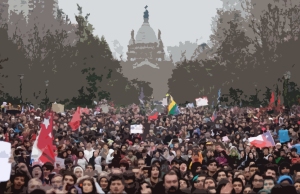 President Bachelet’s government has taken the first steps to implement a much-needed reform in Chile. Nevertheless, its outcome is still unclear. This year will be crucial to determine the future of the policy, as the government enters the second stage of its Educational Reform. On Wednesday, March 4th those interested in the subject are invited to join the presentation “Confronting Inequality: A Critical Dialogue on Educational Reform in Chile” at NYU, sponsored by the Center for Latin American and Caribbean Studies and the Embassy of Chile.

On September 11th, 1973 Chile suffered the breakdown of its democratic system. President Salvador Allende and the government of the Popular Unity (Unidad Popular) were overthrown in a coup d’état that brought the rise of the military to power. The Military Junta was presided by General Augusto Pinochet and ruled the country in a highly repressive manner between 1973 and 1990.

The dictatorship pursued a radical break with the past by implementing neoliberal policies, which led to the overall transformation of Chilean society. Education is usually seen as a prime example of the process. The military oversaw an educational reform between 1981 and 1990 that replaced a state-centered educational model with a market-oriented system. This new arrangement would lead in time to the weakening of public education and the reproduction of the country’s existing socioeconomic inequalities.

Pinochet made sure that his policies wouldn’t be easily changed if he were to step down from Executive office. He did so by establishing high legislative quorums and introducing a unique electoral system (sistema electoral binominal) that gave a more or less even number of seats to the two most important political coalitions: the center-left Concertación de Partidos por la Democracia and the center-right Alianza por Chile. He embedded these rules deep inside the new Constitution of 1980, which was approved in a controversial plebiscite.

This was the institutional framework that Pinochet inherited to the Concertación governments (1990-2010). The setting clearly favored the political right by over representing their votes in the National Congress, turning them into key veto players that blocked –or converted to their liking– any possibility of reform. Thus, the Concertación was forced to play by the dictatorship’s rules, having to seek gradual reforms with an opposition that favored the status quo.

However, there was a growing discomfort with education in Chile. A series of protests began taking place in 2006 with thousands of secondary school students demanding the modification of Pinochet’s Organic Constitutional Law of Education (Ley Orgánica Constitucional de Enseñanza, LOCE). The protests proved to be effective. Socialist president Michelle Bachelet (2006-2010) ordered the formation of an executive committee –that included the most important actors concerned with education in the country–, whose objective was to draft a new educational law. The result was the General Law of Education (Ley General de Educación, LGE).

Many considered the Educational Reform of 2009 as being insufficient. Education was still highly stratified, while public schools continued displaying poor results in national and international tests. Meanwhile, higher education remained untouched, since the LGE had mainly focused on reforming the primary and secondary school levels.

In 2011 a new wave of student protests –this time at the university level– took over the country. They were the most massive protests to take place since the country’s transition from authoritarian rule. Students were demanding access to free, universal and high-quality education. They were also protesting for an end of profit-making in the educational system as a whole.

The government was reluctant to satisfy their demands. The center-right president Sebastián Piñera (2010-2014) granted some policies, but altogether missed the opportunity to find a solution for a problem that had dragged on for too long. At the same time, the student protests held a negative effect on Piñera’s government; his approval ratings fell to a historical low, while his coalition was shortly voted out of office.

The need of educational reform was one of the main issues present in the general election of 2013/2014. Michelle Bachelet made a series of campaign promises that fell in line with what students had been protesting for, such as free and universal coverage of higher education. Ms. Bachelet was voted back into office with strong electoral support and her coalition currently holds a majority of seats in both Houses of Congress, an important feature considering the high quorums needed for amending constitutional laws in Chile.

In 2014 Bachelet was successful in approving a Tax Reform. In 2015, the Senate approved the government’s electoral reform bill and after months of debate, approved the first part of the long awaited Educational Reform. This initiative put an end to profit in state-subsidized schools and to selective acceptance policies.

However, change has come at a high cost. The president has suffered from a fall in her approval ratings, while there has been an increase in political polarization (some opposition officials have even threatened to dismantle her reform as soon as possible). Many voices –from within and outside her coalition– have questioned if there is enough money to fund the Educational Reform or whether the setting is appropriate considering the current economic downturn stirring the country. It is expected that the Tax Reform will provide the funds for the second phase of the Educational Reform, which should focus on salary conditions, bringing public schools under national jurisdictions –as opposed to the current financing through municipalities–, and the much awaited free education for university students.