In June I carried out an ethnographic investigation in Honduras aimed at studying the social and economic effects Palestinian migration has had in the country. Landing in Tegucigalpa is always an interesting experience: having one of the most dangerous airports in the world, the passengers’ excitement after safely landing is manifested through clapping and wooing. But this arrival was different to others I have experienced. The environment was charged with disenchantment and anger towards the corrupt political and business elite that currently rules the country.

Situated in the midst of corruption scandals that have recently erupted across the region, discussions of a Central American Spring have flooded both local and international media. But for the first time in Honduras after the 2009 coup d’état, all sectors of society have united towards fighting against this never-ending problem. Corruption has been one of the main causes for the high levels of inequality, poverty and slow growth that Latin American nations have experienced since independence.

To delve into this socio-economic context is imperative, given that Palestinian descendants compose the grand majority of the Honduran ruling class, which includes the business sector.  Although there are no official statistics, historian Jorge Amaya estimates that around 250,000-300,000 of Honduras’ eight million inhabitants are of Arab descent, mainly Palestinian. No other country in the Western Hemisphere has a higher proportion of Arab immigrants. In absolute numbers, only Chile and Brazil outnumber Honduras in their Arab population.

The Arab community in Honduras descended from immigrants that arrived in the country during the 19th and 20th centuries, as a result of the Ottoman occupation and the subsequent British Mandate . Palestinians that arrived with an Ottoman passport were derisively labeled by immigration officers as Turks (Turcos), in spite of being self-identified as Arabs (whether Palestinian, Lebanese, Syrian, among others).

The Arab immigrants worked hard to integrate themselves into their new community. They began as a nascent merchant class that later dominated key industrial sectors such as energy, banking and media, generating employment and industrialization.

The Arab and traditional landowning elite are viewed as the oligarchy that rules the country. After the 2009 coup, which was instigated by members of the business sector whose interests were being affected by former President Zelaya’s populist policies, a strong xenophobic campaign against the so-called Turcos was unleashed.

Now, protestors are demanding the resignation of President Juan Orlando Hernández. There is also a generalized urge for justice that aims towards the powerful business sector that has historically benefited from the  flawed and corrupt political system.

Popular discontent was triggered by the corruption scandal that involves political and business elites with the overbilling of Honduras’ Institute of Social Security (IHHS). It has been estimated that approximately US$200 million were diverted to the National Party, which houses both current President Juan Orlando Hernández and his predecessor, Porfirio Lobo.

As a result, the IHSS declared its bankruptcy since it had no money to spend on medicine and equipment. Unofficial data states that thousands of people died due to the lack of adequate treatment. These scandals have led to major protests targeting corruption at all levels, which were thought to have an echo in the country’s judicial system when Palestinian-Honduran business entrepreneur Shucry Kafie was indicted with the charges of embezzlement and overcharging equipment. People celebrated the transparency shown by the judge who issued the sentence, but were later disappointed after a bail was made possible to avoid arrest. 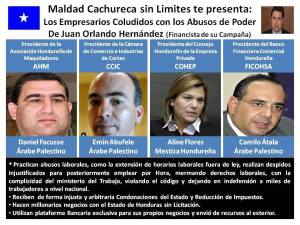 Use of social media to disseminate messages against Honduran President Juan Hernández and prominent members of the business sector, mainly comprised of Honduran-Palestinians: https://www.facebook.com/photo.php?fbid=845846288825036&set=gm.1111340988880855&type=1&theater

Two scenarios may result from this agitated context. The first one is that government officials take this as an opportunity to improve the justice system and put an end to impunity, which could eventually generate satisfaction among a dissatisfied citizenry. The second one would be to maintain the status quo. The latter would cause a brutal rebuff against the political class and its allied business partners, which could turn peaceful protests into violent riots. Honduras could even become the next Haiti –with an added racially charged component– if justice is not enforced.

Spanglish. You're capable not just of a tiny bit more than you believe, but a huge amount more. Color outside the lines. Always believe in love, life and truth. View more posts

One thought on “Palestinians in Honduras: From a Thriving Socio-Economic Trajectory to a Potential Rejection”