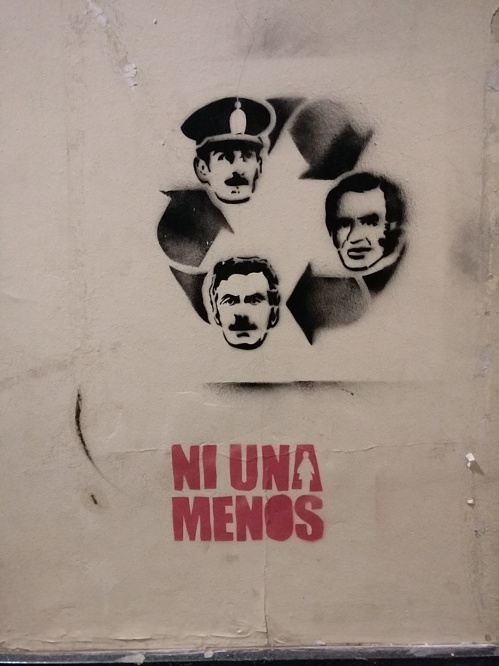 The stencil on top depicts Jorge Rafael Videla, the head of the first military junta that overthrew Isabel Martínez de Perón in 1976 and initiated the neoliberalization of the country; Carlos Saúl Menem, elected president from 1989 to 1999, widely associated to neoliberal reforms; and current president Mauricio Macri, with the universal recycling symbol, as if they were -and they are!- part of the same  process. “Ni una menos” (“Not one less”) is a movement that combats violence against women.

PhD Candidate at the Spanish and Portuguese Department

I’ve been in Buenos Aires for two weeks now. I’m surprised at how much things seem to have changed since my last visit, about a year ago. Many small shops that I knew have closed: after recently elected President Macri devalued the local currency by over 60%, they can’t afford to pay the rent or the dramatically increased electricity and heating bills. For instance Aleksandr, a Russian immigrant taylor I used to take clothes I usually buy for peanuts at the Salvation Army in New York for alterations and repairs, has been priced out of his small work space in downtown Buenos Aires and I’m told he’s now moved deep into the Conurbano Bonaerense, the Capital’s sprawling, densely populated outskirts. Although neoliberalism never left -even with the Kirchners, who so ardently spoke against it- it now seems tremendously reinvigorated. To my dismay, a few days ago, the Secretary of Communications, Oscar Aguad, in a nonchalant way, invoked the infamous trickle-down economics to explain the need for further austerity measures in the energy sector.

I’ve had to change some of my original research plans -some of the performances I was hoping to see were cancelled, as some of the venues they were supposed to take place at had to close as well because of the current situation. I did talk to Alejandro Crotto, one of the emerging figures in the post-90s poetry scene, about his religiousness and how it might be interpreted in an anti-neoliberal context, and how he sees form and tradition as a repertoire, much in the sense of the notion coined by Diana Taylor. I also saw Mirta Rosenberg, one of the editors of Diario de Poesía, probably South America’s foremost poetry journal in the last 25 years, and talked to her about poetry in the 80s, 90s and 2000s. I intended to digitize some of the Diario’s issues that are impossible to find elsewhere, but I couldn’t get a hold on a large scale scanner, since the magazine was printed in a tabloid format.

I was planning to travel to Rosario to see Irina Garbatzky but it turns out she’s going to be out of the country until early August, so I’m seizing the opportunity to travel to neighboring Chile (I’ve saved some money by crashing a friend’s couch, and I’ve also been invited to give a two day seminar on the practical history of rhythm in poetry in Valparaíso) to interview Enrique Winter, a young poet whose collaboration with musician Gonzalo Planet -a project called Winter Planet- can help me better understand the links between poetry and performance precisely where Neoliberalization was first attempted with the coup against President Allende in 1973. I’ve also arranged to see Raúl Zurita, probably the country’s most respected poet -although to call him a poet doesn’t do him justice, since he’s also a prophet of sorts, part seer, part conceptual artist, part performer.