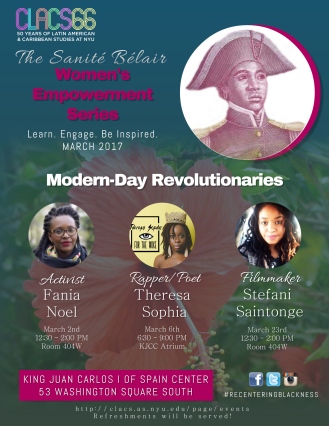 At CLACS at NYU we’ve been celebrating International Women’s Month by hosting The Sanité Bélair Women’s Empowerment Series all this month. So far, we’ve hosted Black Afro-feminist activist Fania Noel and rapper and spoken word artist Theresa Sophia Alphonse. Later this month we’ll be hosting Stephani Saintonge, an award-winning filmmaker & documentarian. To give the CLACS at NYU’s community more insight about the inspiration behind the series, Haitian Creole Language Institute founder Wynnie Lamour talks about Sanité Bélair and the deep historical roots that ground the events:

“Despite the invaluable contribution of many women in Caribbean history, their voices and stories have often been left by the wayside, having fallen prey to the whims of a society that often undervalues women. From providing the nurture needed by their communities to blazing new pathways, women have always lead the way for movements of great change.

The Sanité Bélair Women’s Empowerment Series was born out of a desire to celebrate and center the visionary work of contemporary Caribbean women. Sanité Bélair was a Haitian freedom fighter and revolutionary, and one of the few women soldiers who fought during the Haitian Revolution at the turn of the 19th century. Sanité, whom Dessalines described as “a tigress,” is formally recognized by the Haitian Government as a National Heroine of Haiti.

Just as the Haitian Revolution led the way for so many others in the Caribbean, the courage and fortitude displayed by Sanité during the Haitian Revolution was unparalleled and continues to echo in the spirits of many Haitian women today. Her passion and fire serve as inspiration for the three Modern-Day Revolutionary women being featured this month in the Sanité Bélair Women’s Empowerment Series: Fania Noel, Black Afro-Feminist Activist; Theresa Sophia Alphonse, Rapper & Spoken Word Artist; and Stephani Saintonge, award-winning Filmmaker & Documentarian.”