A year and a half ago, when two Argentinian backpackers were murdered in the Ecuadorian beach town of Montañita, the hashtag #viajosola (I travel on my own, conjugated in the voice of a woman) became popular throughout Latin America. Maria José Coni, 22, and Marina Menegazzo, 21, had been traveling together, with each other, but commentators wondered why they had been traveling “alone” (making the question code for “without a man or a chaperone”). The two young women were even accused, by a psychiatrist consulted by an Argentinian news outlet, of being “víctimas propiciatorias”, encouraging victims.

At the time, the hashtag made me think about my own experience of travel. I had traveled through Europe by myself, visiting friends in some cities and going to others on my own. But in my own country, Colombia, I had never traveled alone. 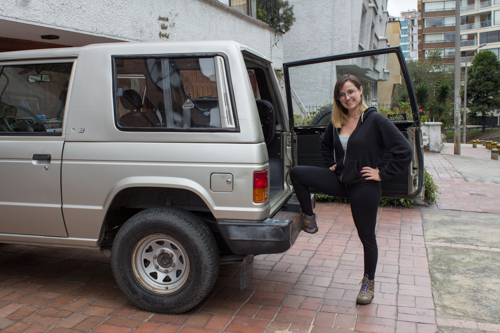 Me in Bogota, preparing to leave for my field research on the gender dynamics of the recently demobilized Farc guerilla in the Colobian region of Arauca

Colombia is a country dominated by fear. When I was a kid in the late eighties and early nineties, bomb threats, scares and actual explosions were everyday events because of Pablo Escobar’s terrorist campaign that included bombing malls. And even after the worse years of drug related violence had passed (or more exactly moved on to Mexico, where the drug violence is said to have “Colombianized”) very high crime rates in the cities and a civil war in the countryside kept Colombians fearful of everything and everyone. (Or more exactly, in this stratified colonial society, of those who were not “gente como uno”, people like us: poor people, nouveau riche drug traffickers, and rebellious peasants).

Will I get my cell phone stolen if I answer a call on a bus? Will I be drugged and be forced to go to several ATMs in an express kidnap and extortion known as “paseo millonario”, the million pesos trip, if a take a cab off the street? Will I be a victim of a “pesca milagrosa”, the miraculous draught of fish, and get kidnapped by rebel guerillas if a take a road trip? (And if the person who asks themselves these questions is a woman there’s always an extra apprehension: Will the thieves, kidnappers or guerillas rape me?)

Of course, not only Colombians are afraid of Colombia. A couple of days ago it was reported that chef Gordon Ramsay is filming a documentary about drug traffic in Colombia. Ramsay not only described Colombia as a “scary and dangerous and violent” place, but actually filmed the promo video, where he appears wearing a bullet proof vest and riding a military-style Land Rover that bears the word Policia, not in Colombia but in Wimbledon, a suburb of Greater London.

“Me parece insensato” (unwise and reckless), said my father when he finally realized I was serious about traveling by myself in his 1994 four-wheel drive to the distant and guerrilla-riddled province of Arauca to do the field research for my master’s thesis . “I’m an adult,” I answered closing off the discussion; but not without wondering if this would even be a discussion if I were a son and not a daughter (and thinking that he might have asked himself the same unanswerable question, as I do not have any siblings).

Arauca, the region where I’m studying the gender dynamics of the recently demobilized FARC guerrilla, is the westernmost Colombian province. It sits on the border with Venezuela on the falling slopes of the Andes mountain range where the rolling flatlands of the Orinoco river basin, Los Llanos, begin.

When the Colombian Nation-State was established up in the Andes and in the main commercial ports in the Caribbean Coast, the Llanos became a sort of backyard, not as intractable as the Amazonian rainforest further south, but still undomesticated and not quite part of the modern Colombian nation that looked away from it. Because of the combination of government neglect and magnificent wealth extracted by enclave oil industries, Arauca became home and stronghold for both major Colombian left-wing guerrillas, the FARC and the ELN.

Therefore, going to Arauca meant not only traveling 380 miles by myself in an old car I would certainly not know how to fix if it were to break down, crossing through the Andes’s difficult terrain, but also going into the lion’s den of the guerillas. Even though the murder rate in Colombia has dropped significantly in the past few years, Arauca is still among the regions with the highest murder rate in the country.

I drove through the highland plateau that was once the territory of the Muiscas, up through the Páramo de Toquilla, a moorland 13,000 feet above sea level, and attempted to plunge down along the Cusiana river. My plan was to break up the trip and spend the night in the foothill city of Yopal, but a late start and a landslide along the Cusiana river forced me to change plans and stay at a small roadside hotel for 20,000 pesos (less than 7 dollars). Although I disagreed with my father’s accusation of recklessness,  I was acutely aware of being a woman traveling alone and decided not to do so at night. Especially not down a tricky mountain road through which I had never travelled before. The next day I ate a hearty typical breakfast of hot chocolate with cheese and scrambled eggs and continued all the way to Tame, the first Araucan town on the Carretera Marginal de la Selva (a road project that is supposed to eventually connect Bolivia, Peru, Ecuador, Colombia and Venezuela along the foothills of the Andes). 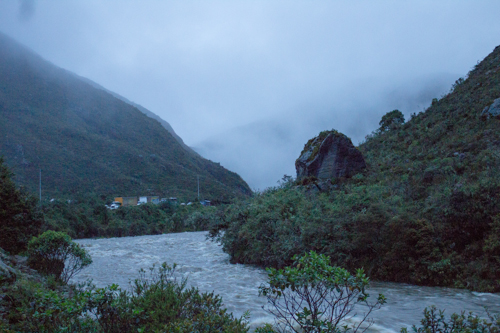 The Cusiana River in the Páramo de Toquilla at 13,000 feet high, and the traffic jam caused by a landslide further down the mountain

Many people were surprised that I had driven all the way to Arauca by myself. My friends called me brave. An older gentleman from whom I asked directions along the way said I wasn’t actually alone but “con Dios y la Virgen”, with God and the Virgin. And Cristina, one of the FARC women I interviewed for my thesis and whom I had befriended a couple of years before under the name Yamileth, said I didn’t need to worry because I had friends in Arauca (a play on the fact that guerrillas are furtively called “los amigos”, friends). 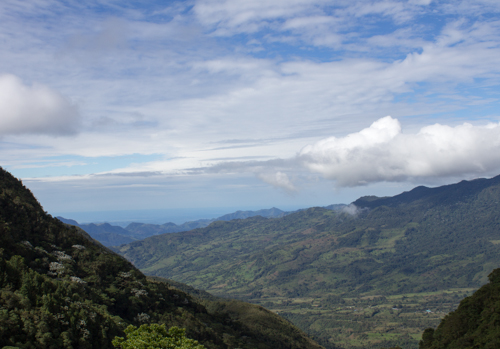 First view of Los Llanos from the foothills of the Andes

Being able to drive by myself halfway across Colombia and into what has traditionally been the untamed, violent territory ruled by the world’s oldest guerrillas goes to show how much things have changed in Colombia after the peace deal between the government and the FARC. Not only literally as the result of dropping murder and kidnap rates, but psychologically as these lead to a general feeling of safety. Now is time for both Colombians and foreigners to feel safe here. This was my first step.

This entry was posted in Field Research and tagged Colombia, FARC, gender. Bookmark the permalink.