Posted by Moriah Ray, MA Candidate at NYU’s Center for Carribean and Latin American Studies. This post was written in the summer of 2017, based on research funded by the Tinker Grant.

In the Summer of 2015, I had the opportunity to study abroad in Havana, Cuba for three months. To prepare myself for my journey, I did what many black women do in preparation for travel; put my hair in braids. This is one of the multiple popular protective styles that black women commonly use for travel because they are low maintenance and last a long time. I assumed that this style would last me through the three months, but with the hot Havana heat, they did not last as long as expected. Before I could even get my braids out multiple women asked me for the extensions that were used to braid my hair. The first two times I was asked I assumed I misunderstood the women. How would my braiding hair be of any use to them? In the U.S when women take out their braiding extensions they normally throw the hair away. I told them that I could not give them my hair but when my Mom came to Cuba in September I would ask her to bring some. I continued to get stopped and asked about my hair. Who did it? Could they use the hair when I take out the braids? Could I do their hair? My hair connected me to diverse black women throughout Havana. I got their numbers and promised them I would return with packs of hair. After two long months, I ended up taking out my braids. I gave my hair to a close friend of mine who was thrilled to have it. She is still using it now, two years later!

I went to the Centro Comerical in Nuevo Vedado, one of the few “shopping centers” in Havana, to look for some hair products to do my hair. I wrongfully assumed that in a country that is majority black there would be hair products catered towards black women’s hair. There was absolutely nothing. The majority of the products had keratin chemicals to “treat” natural curls. After the centro comerical failed me, I looked in the “black market” stores I knew about, but found nothing. Discouraged, I asked my friend what she used in her natural hair to moisturize it? She told me that she used “cocinero,” a brand of cooking oil! How on earth did black women manage to maintain their natural hair in Cuba?

As I walked the streets of Havana with my natural fro I quickly noticed that my hair was considered rebellious, and to many people ugly. The cat-calls reduced significantly and random women would come up to me exclaiming that they knew someone who could ayudarme with my hair. This led to a unique type of solidarity between the black women I encountered who wore their hair in natural styles (fro, braids, etc.). Sometimes even without words, a moment of eye contact spoke volumes. A silent shared resistance.

These experiences are what led me to want to research and further explore black hair politics in Havana. What does it mean to wear your hair natural? What are the daily struggles of having natural hair? How have black Cuban women overcome these barriers? How does popular culture contribute to these Eurocentric notions of beauty? This summer, I researched these questions through interviewing a variety of different Afro-Cuban women about their thoughts on black hair. Additionally, I participated in organizing a natural hair conference, through which Afro-American natural hair stylists from the United States came and discussed and demonstrated natural hair practices. My thesis will focus on the relationship between hair practices and race politics in Havana. I found that hair has a major social influence on Afro-Cuban women’s everyday lived experiences, especially when it comes to anti-blackness and internalized oppression. My research will also argue that Afro-American and Afro-Cuban women are using their hair as a unique medium to build transnational anti-racist solidarity.

One of the many aspects that I hope to unpack in my thesis is the impact of popular culture on beauty standards. There are only four stations on Cuban Television. Genres of music such as reggaeton and hip-hop are rarely seen on TV, despite how popular both are. Nonetheless, music videos can be found blasting in almost any restaurant in Havana. Additionally, through the underground market of the paquete many households in Havana have access to the latest national and international music videos in their living rooms. Black women are rarely seen in Cuban music videos, especially not with natural hair. Music videos often spread the latest fashion trends and social dances in Havana. They also send very direct messages about what is considered beautiful.

One excellent example of the role of popular culture and music videos on natural hair is Juan Formell y Los Van Van 2015 hit La Moda, La Keratina. The main character of the music video is a mulata girl who has a natural curly fro but has dreams of having straight hair but cannot afford it. By the end of the music video, she gets a straight hair wig and her life is transformed. The music video suggests the value of keratin in Cuba is equal to oil in a comical satire. The message makes a clear statement about beauty; straight hair is beautiful and curly hair is not.

For black Cuban women, hair can be a major economic and social obstacle, so much so that it even influences family planning for some. I interviewed a 12-year-old in the neighborhood of 10 de Octubre who told me that when she got older she wanted to marry a “blanquito” so that her offspring did not have “pelo malo” like hers. Her Mother was in shock at her daughter’s suggestion and urged her not to think that way, yet it is hard for a mother to contest the strong and highly consumed imagery of music videos like La Moda, La Keratina. My research shows that these internalized oppressions have proven to be extremely detrimental and consuming.

Self-hatred is not something that is unique to Havana. This is a global phenomenon that simply is a reflection of hundreds of years of colonial rule and oppression. Nonetheless, I think it is important that we examine and study manifestations of self-hate in diverse geographical contexts that share a common history. Due to various factors, a counter movement to combat toxic notions of Eurocentric beauty standards has been sparked in the US, Brazil, and various other countries with large black diaspora populations. Black women and men are producing their own products and businesses centered around catering to the needs of black hair to combat the vicious trauma that comes from internalized oppression. Through my research, I explored what is being done in Cuba to fight against these notions of beauty. Although a “movement” has not necessarily developed to the same degree as the countries previously listed many of the leading ladies of hip-hop in Havana are making statements through their pelo. Additionally, organizations such as my own, The African Diaspora Alliance, and many others are standing in solidarity with black Cuban women through transnational conferences and diverse community projects. 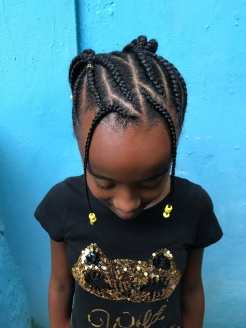 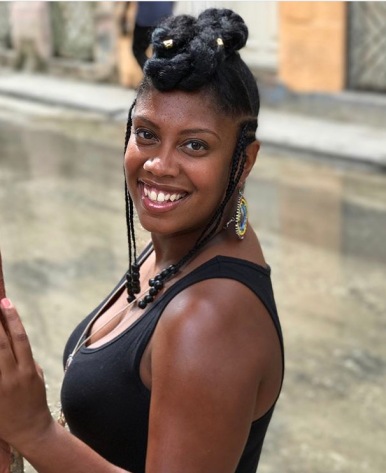 This August I was honored to host a natural hair conference in Centro Havana! A dream of my CoFounder and I since our 2015 hair crisis when we took out our braids. Natural hair stylists joined us from the N. Natural Hair Studio in Washington, DC and donations from throughout the country were distributed at the conference.  Additionally, stylists shared homemade recipes for women to make healthy products at home. One of the audiences favorite portions was when Dr. Afiya lectured on the hair practices of various African tribes and the meaning of each. Many of the most popular braiding styles throughout the diaspora have very unique meanings. The conference lasted for over three hours and women continued to pour in until the very end. Hair demonstrations were done on various women and hair technique exchanges were made between Cuban hair stylists and stylists from the US. The conference was an excellent opportunity for my research and a perfect example of diaspora solidarity. As the Cuban government continues to neglect the issue of racism, grassroots activists are engaging in unique projects and partnerships to deal with the elephant in the room. Racism is alive and well in Cuba and with the spread of capitalism, it is worsening. In order to take on the global system of white supremacy, it will be necessary for Afro-descendants to come together from across the diaspora and combat anti-blackness however we can.

One thought on “The Politics of Black Hair in Havana: Reflections on Sisterhood and Diaspora Solidarity”