14 August 2017 – Opening Ceremony for the UFF Graduate Students in Cinema Studies in Niteroi. The professors came one after the other with the same message summarised in this blog post’s title. Once again, the country is experiencing a major moment of political and economic crisis and the Arts are in danger. In the conversations I could hear in the corridors, some students worried that their departments would close down; others had no clue whether they would receive their doctoral stipends next month and some libraries reported that they would not authorise students to check out books anymore… 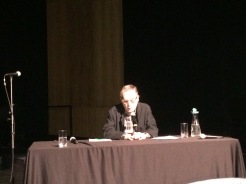 I arrived in Rio de Janeiro primarily to do archival research on the development of Brazilian youth films / coming-of-age narratives since the 1990s. However, very quickly, the current context would provide me with a new layer, maybe even more interesting, to reflect on Brazilian cinema as a form of resistance. In my very first day in the archives, the archivist Fabio Vellozo, who would become my guide for the next four weeks, explained to me that the MAM Cinema and Visual Arts Archives hosted many meetings that gathered together cinema activists during the dictatorship. Since then, the Archives have assumed the mission to preserve the cinemas that have best represented the diversity of Brazil. And this task requires a lot of work from the staff working in the Institution. Unlike many scholars that spend only a few days at one archive location and proceed to work at different sites, I remained there for my entire stay, giving me the chance to actually taste everyday life in the place.