Bogotá and Bicycles: Steps Towards Sustainability

Bogotá is an enviously bike-friendly city, although the bikers themselves are less than friendly to tourists ambling haplessly across one of the city’s 300 km* of ciclorutas. Despite neglect by recent mayors, this network of bike paths and the city’s weekly ciclovía have managed to create quite a bike culture. It’s an impressive urban development in a city where the average driver can out-careen any New York taxi.

Since my thesis research currently looks a bit like squirrels nesting in a frat house, I’ve decided to write about this bike culture that has caught the eyes of sustainability-minded transportation planners around the globe.

END_OF_DOCUMENT_TOKEN_TO_BE_REPLACED 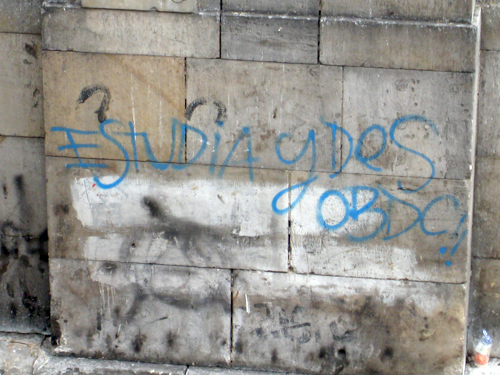 “Study and Disobey,” graffiti from the Plaza de Bolivar

I wasn’t in Bogotá for last year’s spate of student strikes and protests, nor have I seen its student movement in action. Its wake, however, is everywhere.

The graffiti doesn’t last long in the ritzier areas of the city. It’s wiped off advertisements rather quickly; the pretty woman declaring her desire to “estudiar” from the wall of the bus stop by my hostel was, by morning, yearning once more for the “solidez” of the cell phone network Claro. It lasts longer on university walls, but the artistic vandalism is at its most rambunctious and its most visceral in the Centro, where colonial architecture becomes a platform for modern conflicts and paintball protests have turned government buildings into Jackson Pollock paintings.

Sometimes it’s hard to discern who’s responsible for what when conducting graffiti archaeology; Bogotá is a city with protests in its mortars and a lot to be discontent about. END_OF_DOCUMENT_TOKEN_TO_BE_REPLACED