Indigenous Languages on the Airwaves

It is 3 am and, if I am to believe my cellphone, it is also -9°C in Puno, Peru. Even if there was heating in the place where I am staying (and there is none) I would probably still be cold. But my excitement compensates the weather as I am heading once again to Radio Onda Azul (ROA) for its “Quechua Rimayninchik” weekday program. Andean music, plenty of jokes, calls from communities far away, but also reflections on the state of indigenous peoples nowadays: all of these and more come together from 3 to 5 am. Chaska and Norma, two women in their early 30s, are in charge of facilitating these exchanges and making sure that the conversation keeps flowing.

END_OF_DOCUMENT_TOKEN_TO_BE_REPLACED

In this podcast, NYU professor Gillian Gallagher and NYU student Neil Myler speak with Gladys Camacho Rios in Cochabamba, Bolivia. In the interview they talk about Gladys’ life and about a historical novela she wrote.

Subscribe to Rimasun via iTunes or via another podcast service 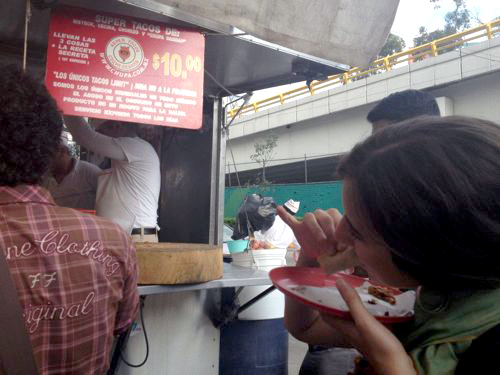 One of the challenges of conducting ethnographic fieldwork with street food vendors in Mexico City is that they are, necessarily, a dispersed and mobile population.  In the center of Mexico City alone, it is estimated that there are over ten thousand vendedores ambulantes[1], and there are many tens of thousands more strewn throughout the sprawling landscape of the metropolis.  Some of these vendors reside in the city, while others commute for hours from surrounding towns and villages everyday to come and ply their wares.  Some belong to street vendor unions, with their own organizational structure, leadership, and rules, while others are autonomous free agents, negotiating their own way through the necessary formal and informal channels in order to make a living.  In some districts of the city, local government is explicitly hostile to ambulantaje and determined to “clear the streets” of them, while in other areas they are tolerated and accommodated by various levels of local officials.  On some streets vendors keep their products on large sheets on the sidewalk so that when police officers come walking by, they can grab everything and throw it into the trunk of a nearby car to avoid confiscation or fines, yet in most parts of the city it is common to see uniformed officials eating tacos and chatting with workers.  I have met vendors who have spent over half a century working from the same street corner, and others who daily engage in cat-and-mouse games with local police or lideres as they attempt to stake a claim to a few square feet on the side of the road.  Certain stands are famous and earn large sums of money for their owners, while in others families work seven days a week for fourteen hours a day and still barely eke out enough to live off of.   END_OF_DOCUMENT_TOKEN_TO_BE_REPLACED